Forget that 12 months prior Pakistan had beaten England at the Cricket World Cup to claim their one and only title success to date, because in 1993 arguably the greatest cricket game of all time was released: Graeme Gooch World Class Cricket.

Yeah sure, Cricket 64 and Arnie Armchair Howzat Cricket were both released well before the Graeme Gooch endorsed game, but they did not offer the graphics and fun gameplay that launched onto our oversized Amiga 500 monitors every time we inserted the floppy disk to upload the game.

These days, game such as Ashes Cricket really embed you into the game in seemingly realistic circumstances and with the World a matter of months away, the popularity of the latest cricket offerings will only enhance.

Especially in England where the hosts are favourites to lift the crown in the cricket World Cup 2019 betting remarkably for the very first time.

However, harking back to the early 1990’s and Englishman Gooch was hot property.

Game developer Audiogenic were quick to latch onto this but were no doubt a little disappointed after England lost the Cricket World Cup Final in successive tournaments in 1987 and 1992.

That did little to dissuade the British cricketing public and Audiogenic went head first into creating one of the most memorable Amiga games ever created.

As the player, you had the choice of competing in test matches or one day internationals with all the official test teams from 1993 included in the game.

You also had complete control over field positions should you so wish (or set to automatic which was a lot quicker) and three difficulty settings meant the gameplay could keep you going for an age.

Bowling was also an impressive affair with fast paced bowling, spin and swing options allowing you to make an array of bowling actions when acting as the fielding team.

One of the most overlooked details was the inclusion of detailed statistics such as batting averages, something we expect now as a bare minimum but in 1993 really quite revolutionary.

Then there was the graphics.

Pseudo-3D styling was used (essentially a trick on the eyes to make 2D images look as if they are 3D when in fact they are not) and the result was bold colours, facial features and exquisite movement that was well ahead of its time.

However, that was not even the best thing. Those of you lucky enough to have played will remember that to score runs you had to wiggle the joystick from side to side and the quicker you went, the faster your character ran.

There was a major drawback to this method though, time the movement wrong and your batsman would start for a second run leaving you to get run out more often than not.

A small gripe, but one that would be unacceptable in todays plethora of high-tech gaming.

The game was also the launchpad for a series of updates and follow-ups. Brian Lara Cricket and Shane Warne 97 all stemmed from the original Graeme Gooch World Class Cricket marking it as an all-time great.

Even today, the game is playable and still retains an element of fun and in-depth gameplay despite being 26-years-of-age.

Sometimes the old ones are the best and Graeme Gooch World Class Cricket is arguably the greatest ever. 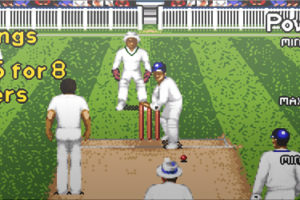