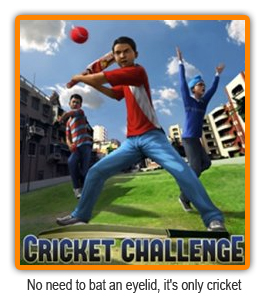 Gameshastra's Cricket Challenge on it's way to a WiiWare release

A gentleman’s game Gameshastra is India’s largest games services company (apparently) and has had its upcoming cricket game rated by the Pan European Game Information ratings board, bowling its way to a WiiWare release.

Formerly announced as Balle Baaz, Cricket Challenge will be the first cricket game to launch on the download service. The developer’s last release on a Nintendo platform ―Tumblebugs 2 ― scored very well in our review, so if Gameshastra can replicate the good work it did on the game controls, we should have a solid cricket game to spend our Nintendo Points on.

Cricket Challenge is an arcade style sports game that gives you a fun filled experience while playing as a batsman in a game of cricket. Using the Wii Remote as a real cricket bat you can swing and control the actions of a batsman to make him play strokes, hit boundaries, 6’s and try a variety of shots. The game is set-up in play ground amidst an urban background with builds, apartments and a lush green outfield.