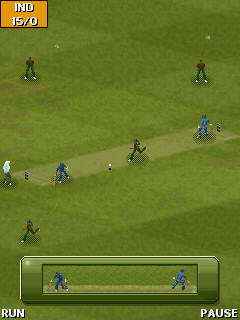 No one knew that EA could also do some magic. Though they were not able to release the Cricket 09 for PC, they have released a mobile version of Cricket called EA Cricket 10.

No one knew that EA could also do some magic. Though they were not able to release the Cricket 09 for PC, they have released a mobile version of Cricket called EA Cricket 10.

Coming to this game, it’s the most advanced and best cricket game ever released for Mobile phones. This game is more than enough for a platform like JAVA mobiles. The game is comprising is not comprising of only batting and bowling but also Challenges mode, tournament mode and for the first time, Training Mode. Go and try our the World Cup mode to experience the game completely.

Coming to the Gameplay and Graphics, this game is again doing well here. With the glossy user interface, this game is also comprising of special sound effects and graphics. The Gameplay is really realistic. You can play number of shots but hitting sixes isn’t easy as the fielders are really quick. The worst thing is that shots are limited and there is hardly any variation in the shots. The bowl will swing according to conditions. The Kits of the players also look realistic and seems to be like the original ones. In the bowling, you could try different types of deliveries and introduce some variations.

What the bad thing is that the game is not licensed hence you still have to play with the Fake names and the game is only available for the Mobile phones supporting resolution of 240*320.

After releasing a good quality mobile cricket game, we can expect them to release a good cricket game for consoles and PC too.