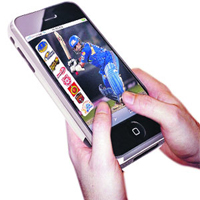 IndiaGames has announced it's multi-year partnership with Global Cricket Ventures. The eight year deal will strive to deliver interactive gaming directly to cricket fans across the world and not just India.

IndiaGames has announced it’s multi-year partnership with Global Cricket Ventures. The eight year deal will strive to deliver interactive gaming directly to cricket fans across the world and not just India.
The company will create a new range of cricket based games, approved and licensed by the IPL. Along with mobile gaming, there will also be a series of online games. The unique feature of the online games will be its seamless integration with social networking giant Facebook. This will enable users to merge Facebook friends with IPL cricketers. The game will allow players to create their own IPL teams along with their Facebook friends to play against any other IPL team. The other feature is the micro-transaction support for the online and mobile game enabling users to buy IPL players to improve their chances of becoming the IPL Champion.

The first game to be launched is the ‘IPL Indiagames T20 Fever’, a browser based, high-quality, 3-D cricket game. In addition to that, the players can also purchase players for virtual currency and include them in their team. Vishal Gondal, CEO, Indiagames said, “Having the opportunity to publish the official IPL T20 game has given us renewed inspiration to push the bar even higher. Our social- enabled mobile and online games in association with Facebook and other social networks will provide a new experience which blends cricket fans’ dreams with reality.”

The second game is called the ‘IPL Indiagames 140Cricket’ which is based on the Cricket manager concept. This will be exclusively targeted towards Twitter users. Besides releasing the games across all mobile phones, content and applications will also be exclusively created for the iPhone and iPad.