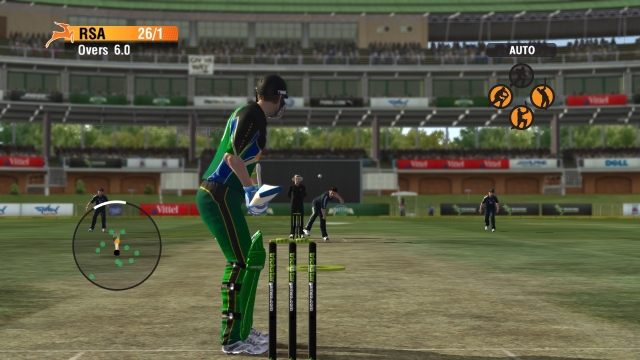 Read CricketGaming's International Cricket 2010 review for PS3 and find out what's special in Powerstick and Action Cam. Also, find out who is Mr. James Blond!

After enjoying Codemasters previous release ‘Ashes Cricket 2009’ for the past 10-12 months, I was anticipating a game that would keep a cricket mad Englishman like myself entertained for at least the same amount of time and I knew that to do this, IC 2010 would need plenty of improvements on the last game.

When playing my first match, I knew that England and Australia were the only licensed teams on the game but I just wasn’t in the mood for that infamous battle, so instead I went straight to ‘Player Editor’ and corrected the names of the Pakistan team so I could play them in a Twenty20.

Now that I’ve had a chance to spend some time playing the game, I can take you through my opinions of some of its key aspects:

England and Australia players are the only ones to comment on of course, and I remain impressed with the standard of realism for player faces. There is still room for improvement though, perhaps with the builds of players bodies and further detail to faces. The stadia is generally very accurate and it’s worth mentioning that cut scenes have also improved.

Another key aspect of any cricket console game. As many of you will know, Bumble (David Lloyd) has finally got his voice on a cricket game, replacing the ever so slightly less excitable Sir Ian Botham. Unfortunately, I do not feel that Codemasters/Trickstar Games script has quite captured the unpredictable and darn right jolly nature of Bumble, even his trademark saying “Start the Car” hasn’t been recorded!? The commentary is altogether accurate and certainly adds to the game, but like with most things, there is room for improvement.

The game play is fairly similar to AC 2009; the AI is still a little too aggressive for my liking and I find it extremely irritating having to stick to bowling in the light green areas to avoid the batsman just whacking it… the truth is that the margins are far too small and it would be much more entertaining trying to trick the batsman by bowling a variation of line and length. This time you have to hold the bowling cursor in place rather than just picking your spot from the off. Personally, I find this a bit of a chore and I tend to resolve this by auto-playing many of my over’s in the field. Batting is good fun and I enjoy the challenge of playing on ‘Hard’ difficulty as it becomes trickier to time your shots. 3rd umpire decisions are now shown on the big screen which enhances the excitement and free hits are now implemented into ODIs as well as T20s. 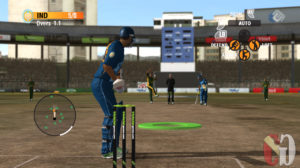 As for the new innovations ‘Powerstick’ and ‘Action Cam’, I am reasonably impressed. ‘Powerstick’ allows you to hit shots a shorter distance even with perfect timing, meaning you can push for quick singles; this is definitely an improvement for batting. ‘Action Cam’ is an aspect that I have only briefly used, mainly because on the toughest difficulty level as I play on, it is hard to get used to! However, I’m sure that it is a feature many will enjoy.

This was an area that I really wanted to see improvements in. Whilst it’s clear that no bowling actions or batting shots are trademark of any players, there is now a range of bowling actions that make the game less robotic. Batting shots are sometimes not so easy-on-the-eye, particularly when advancing down the wicket, and what’s most disappointing for me is that common modern shots such as the ‘Dilscoop’ and ‘Reverse Sweep’ cannot be played, even with the likes of Eoin Morgan! Had these been implemented, it would make for a much more thrilling game, especially when using ‘Action Cam’. 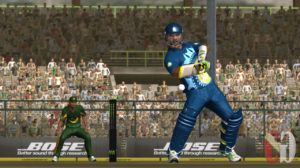 Unfortunately, due to lack of licenses, there is a lot of editing needed if you want to enjoy full realism. Some names are difficult to correct if you have a lack of knowledge of some of the smaller nations and personally I wasn’t particularly amused by Shane Bond being called ‘James Blond’, nor Ryan Hinds being ‘Wavely Hands’, though there may be some who enjoy this?!

The squads still consist of just 23 players per country despite many wanting to see more players added, while they’ve been updated, I still found myself having to create a few England players such as Kieswetter and Finn, due to them perhaps being a little too recent to have been included. The options for appearances have become more life-like; however, there are now only around 25 options per skin colour- with little variation in hair length/colour and facial hair, which is a shame. The ‘Skills’ settings are the same as last year but there are now many more items in the ‘Kit Bag’.

I was delighted to see that a number of game modes were now available. Domestic cricket and Career Mode which we’d all love to see were always going to be too big an ask due to licensing and the huge effort it would take starting from scratch with such modes. On the other hand, you can now play an unofficial ‘World T20’ and ‘Champions Cup’ (a spin-off of the Champions Trophy) plus many different test series with more nations now involved in the game. I also plan to create a tournament that involves all of the minor nations when I next play the game … The only thing lacking is still no ODI or T20 series modes.

Overall, this is a quality cricket game that will excite experienced fans of the sport as well as the new. There are still plenty of areas that can be improved upon, but I don’t want to put you off, cause it’s well worth buying! Especially for those who didn’t purchase ‘Ashes Cricket 2009’.