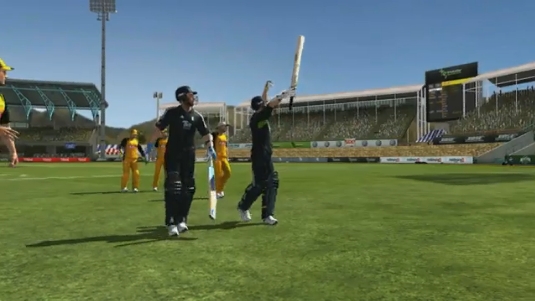 In the launch video, Twenty20 World Champions England take on finalists Australia in the short format of the game, and play Bangladesh in a Test match accompanied by commentary from David Lloyd. The gameplay video also showcases Action Cam, the innovative new on-field perspective that takes players right into the heart of the battle, whether batting or bowling.


David Lloyd, affectionately known as ‘Bumble’, is one of English cricket’s most loved personalities with over 70,000 followers on twitter who receive wide-ranging updates from pitch conditions to whether the broadcaster has secured a curry and a couple of pints at the end of a long day’s commentary. He has been uniquely involved at nearly all levels of the game, from Test player to England coach, umpire and Sky Sports commentator and is now making his debut behind the microphone for the first time in a Codemasters cricket game. He is joined in game by Shane Warne, Ian Bishop, and Jonathan Agnew to deliver the most authentic commentary in a cricket game yet.

International Cricket 2010 is the most accurate representation of the sport yet. Reflecting real life, players must adapt their playing style to the format of the game they are playing. Twenty20 games are fast and furious, and gamers have to take advantage of power plays where the field is more open to score runs quickly. In the Test format of the game, players must build confidence with both their bowlers and batsmen in order to build momentum and increase their ability to take wickets and smash boundaries.