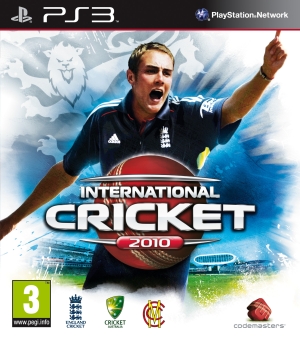 Stuart Broad to be on the cover of International Cricket 2010 for PS3 and XBox 360. Stuart Broad is the fast rising star of English cricket and set to lead the bowling attack in this summer’s fixtures against Pakistan, Australia and Bangladesh.

Today Codemasters® is proud to reveal that England star Stuart Broad will feature on the cover of International Cricket 2010™, coming this summer for the PLAYSTATION®3 computer entertainment system and Xbox 360® video game and entertainment system from Microsoft®. To celebrate the announcement, Codemasters has today released the first gameplay video for International Cricket 2010, featuring Stuart Broad and other stars in action – and is available to view at www.codemasters.com/cricket.

Stuart Broad is the fast rising star of English cricket and set to lead the bowling attack in this summer’s fixtures against Pakistan, Australia and Bangladesh. A key member of England’s Ashes winning side of 2009, his man of the match performance against Australia at the Brit Oval saw him take 5 for 37 in the deciding test as he emerged as one of the world’s leading bowlers.

“It’s fantastic for me to follow in the footsteps of legends like Brian Lara and feature on the front of a Codemasters cricket game,” said England star Stuart Broad. “I’m a huge gamer so it’s exciting to be involved with Codemasters, who have always produced the most authentic and realistic cricket games. When I’m away with the team tour, playing games on our consoles is a great way to pass the time and enjoy some banter. I can’t wait to take on the rest of the lads – and beat them – in International Cricket 2010!”

“Stuart Broad has established himself as one of the most exciting players in world cricket and we’re delighted to sign him up to feature on the front of the pack,” added John Szoke, Producer, Codemasters.

Produced by Codemasters and developed by Trickstar Games, International Cricket 2010 steps up to the crease with a range of innovations and improvements including a new player and AI confidence system. In International Cricket 2010 as in real life, confidence is key to success. In the test format of the game, gamers must play themselves in as batsmen and build momentum as bowlers, improving their ability to play advanced shots and take wickets. In shorter formats of the game, confidence can be gained and lost much more quickly as players look to take advantage of the pressurised conditions.

Other key enhancements include ‘Action Cam’, the new camera that takes players right onto the pitch, and ‘Power Stick’ which gives 360° degree batting control to ensure International Cricket 2010 will deliver the most authentic interactive cricket experience ever. 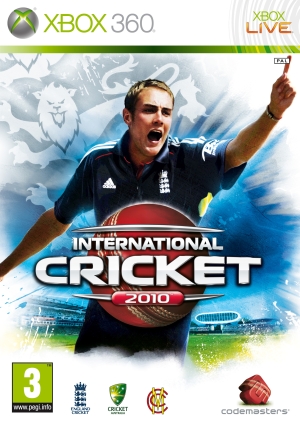 Officially licensed by the England and Wales Cricket Board and Cricket Australia to feature official players, stadia and kits, International Cricket 2010 can be enjoyed in a wide range of game modes including new instant tournaments, full test series and quick-fire Twenty20 matches. Gamers can compete as any of the expanded roster of 16 nations at an improved selection of 21 stadia around the world, including Lord’s, the Home of Cricket.